I wrote this for my Non-Fiction Short Assignment for class. I sat down to write other things for the assignment but this kept bubbling to the surface. I had intended on posting it to the blog after it was graded but it has set on my desk for a week or so. Looking at the date on the calendar I have decided to post this to my blog today and leave this very painful memory in the past, leave it in 2015.  This is a true story of an event that occurred in my life in September of 1998.

The Other Side of Fear

I met John in the fall of 1997. This was a time I was very alone. I was trying to reclaim my life after the divorce. I had made some giant strides in re-establishing a career.  I had everything but a friend and companion. When I met John, we just clicked. We shared similar interests, we laughed a lot. We talked a couple of times a day on the phone. He was my best-friend.

For years, John struggled with addiction. He was clean and sober for over a year when I met him. He was creative and had an immense talent for woodworking. He fashioned the most beautiful pieces out of scraps of wood. He would call every day especially if he knew I had a hard day at work. . I didn’t think I could do rely on anyone after my divorce but with time I trusted him. This is why what happened on September 19, 1998 all the more a surprise.

It was a Saturday. I went about my chores. I kept waiting for his phone call. I called him. No answer. I made a quick trip to the grocery store. When I returned to start dinner, still no message on my machine. I knew something had to be wrong. Years before we met he had a car wreck that left him blind in one eye. He had to take Neurontin every day for seizures. I was worried about him so I called a couple of our friends and no one had seen him. I turned off the stove and got in my car.

When I arrived at his apartment, I could hear this stereo blaring from the street. I climbed the stairs that went uphill to his apartment. The door was cracked open about an inch. It was pitch dark with the exception of the blue light that illuminated the dial of the stereo system. I pushed the door open calling for John. He didn’t answer. I saw him lying on the sofa, motionless. My heart sank as I ran to put down my purse on the floor, and turn down the radio. As I turned on the lamp I saw beside him an almost empty half-gallon bottle of Jack Daniels.  I knew he was drunk.

Hindsight tells me I should have picked up my purse and left. I should have walked away. What I did instead was rage at the situation with shocked disbelief and anger. I grabbed the bottle off the floor and smashed it onto the side of the coffee table. My anger got the best of me. The remaining alcohol spewed everywhere. Shards of glass when flying into the air. Before I knew what was happening he was awake and had his hands around my throat. I had never seen him drunk before, I did not know the depths of his anger. His grip raised me off the ground, my body dangling in the air like a little girl’s ragdoll.  I still had the remains of the bottle in my hand and I knew if I just dropped it he could pick it up and cut me. I didn’t want to hurt him either, as strange that sounds. I threw the neck of the bottle behind the sofa. I fought him trying to free myself from his grip. I continued to dangle as he slowly walked us across the small living room toward the fireplace.

I began to feel the effects and started to choke. I mouthed the word, “Mandy”. He knew how much I loved my child. He slowly released his hold around my neck. I closed my eyes for a moment but when I opened them I saw his fist coming at me. His full force blow threw me into the mantle edge of the brick fireplace. I struck it just at the base of my skull and fell toward my left side. When I hit the floor I felt the glass shattering from an oversized Oriental porcelain pot that sat in the corner. For a moment I was still but I could see the outline of the peeling plaster on the wall, then my body tingled with an electric energy. I felt as if I was drifting away.

This time I prayed “God take care of Mandy, take care of my child.” I began to feel pain intensely. I hurt allover. I could feel blood streaming down my neck. The room whirled with confusion. Then I began to seize uncontrollably. My entire body twisted and contorted with painful jolts down my spine.

I could hear John screaming, “Let me find my gun and I will end this shit!” He saw I was seizing because he yelled, “That’s it bitch, lay there on the floor and die.”

When my body stopped seizing, I could hear him throwing things in the back of the apartment. I knew I had to get out of there. I managed to pull myself up to my knees. I grabbed my purse that was sitting across from me in the floor.  I got to my feet and tried to run. It was hard because I was so dizzy.  He grabbed me by my hair and yelled, “No bitch, you ain’t going nowhere.” He threw me on the sofa and walked back toward the kitchen.

I reached in my purse and pulled out a twenty that was stuck in an inside compartment.  “Here John, I’m so sorry,” I cried. “Here go buy another bottle.”

He said, “Oh, no you’re not.” He kept looking for the gun. As he entered the kitchen I sprinted for the door. He followed. As I got to the staircase I began to holler for anyone that was around to help me. No one was there, no one answered. I got to the top step and he lunged for me, and fell to the ground. I made it to my car, got inside and locked the doors. My trembling hands could hardly get the key in the ignition.  I was so sick. I managed to crank the car and as I pulled away I could hear him hollering at me.

I drove as fast as I could. I felt the side of my head with my hand, as I merged into a small line of fast moving traffic on I-59. My hand was covered in blood and waives of nausea came over me.  Tears flowed down my face. I was afraid I was going to die. I just wanted to feel safe again.  I pulled into the parking deck of Bessemer Carraway. No one was around. It was a Saturday night in September, still warm for this time of the year.  I parked my car and when I got out, I could see blood on the door handle. How surreal; it was mine. I made my way, staggering to the elevator. I pushed the button, leaving droplets of blood behind. When the doors opened, I saw an elderly woman screaming at the ghastly sight of me covered in blood. I hit the floor in front of her.

The next thing I remember is being transported very quickly down the halls toward the emergency room. The room was filled with movement as they started an IV, and the doctor examined me. My clothes reeked of Jack Daniels, the collar and sleeve saturated in blood. The Doctor asked, “How much have you had to drink?” “Nothing!” I cried, “I smashed a bottle and it got on me.” I explained what had happened to the best of my ability. They looked at me with questioning eyes like they didn’t know whether to believe me or not.  I was crying hysterically. I was still in shock and emotionally numb from the experience. They sent me to have a CAT scan. When I returned a Birmingham Police officer was in the room waiting to speak to me. I told him what had happened. He said given the facts that, I had entered John’s apartment without an invitation I could be counter-charged with breaking and entering if I pressed charges against John. I couldn’t believe it. I was shocked. I had a concussion, cracked ribs, a broken jaw, a head full of stitches and I could be charged with a crime. He took photos for the file and gave me a card with a case number. The card also had the number of someone I could speak with about the matter, “just in case you need to talk to someone.” I still have that card to this day. I keep it as a reminder of a time in my life when I thought this could never happen to me and how quickly life can change.

Before this happened, I was beginning to trust again. Afterwards, I was filled with anger and self-doubt. I didn’t trust my own instincts. I doubted myself. After all, I had thought John was one of the good guys. I began to doubt my decisions. I moved to the other side of Birmingham, to an apartment that had security at the door. I was living my life in fear. . It has taken me a very long time to resolve the events of that day.

In 2000, I made the move back to my childhood home. My Mother needed help with my ailing Father and I needed to feel a sense of safety and peace again. This is the one place I have always felt safe. This ordeal, left me with fibromyalgia, nerve damage in my neck and jaw. I have physical, emotional, and mental scars but my spirit is beginning to heal. I found out John died in 2011. I don’t know the circumstances. I just know I no longer have to look behind me, I no longer fear.

Now, with this event some 17 years in the rear-view mirror of my life, I can speak about it.  Time has given me clarity- peace.  It has also given me strength. Strength to speak out- to share my story in the hopes someone else will listen and leave a similar situation.  If you or anyone you know is going through a situation in which they are not safe and secure, now is the time for action.  Seek help, it’s out there. Go to your local counseling center for Domestic abuse. Reach out to groups online who can and will give you haven and shelter. Do not let yourself become a victim. Speak up-speak out.  It is in our duty to speak out for those who can no longer speak for themselves. Those who have died from domestic violence.  Life for me, since I returned home, has been filled with countless beautiful memories that would never had happened if I had died on September 19, 1998. 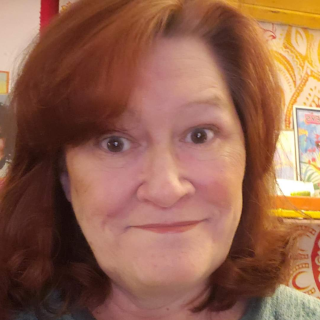 57yr young female, who loves art, music, the ocean, cats. Art & Writing are my passions.I am self-taught artist. I have a B.A. in English and am working toward my M.A. in History from American Public University. I am the daughter of a beautiful Momma and a Momma to a beautiful daughter..♡☆